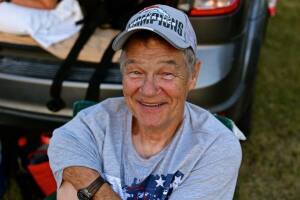 Van Kent Lupher, 70, of Aurora, passed away unexpectedly July 29, 2020 at Parker Adventist Hospital. He was born April 26, 1950 to Marvin and Della (Vannoy) Lupher in Greeley, Colorado.

He graduated from Grand Junction Central High School with the Class of 1969. Van married Sheryl Lynn Pottorff, the love of his life, on June 6, 1971 and together raised three sons.  Always a hard worker, Van was a route salesman for Dolly Madison, Golden Cup Coffee, Coffee Break and Custom Coffee throughout his career.

Van’s favorite hobby was being a devoted husband and father. He lived for his wife and kids. Van was very proud of his sons’ accomplishments.  Van’s eldest son, Brad, remembers waking up as a child every Saturday morning to go fishing at Quincy Reservoir. Van was an avid Broncos fan and loved watching his kids play sports. Whether it was Brad’s track & field, football games, or Travis’s basketball games, he would be there. Van was very proud of Eric’s singing and showed it off whenever he could. He loved his dogs and loved his cars. He cherished his Jaguar convertible. In his younger years, Van was an avid bowler. His parents, Marvin and Jeanne Lupher, owned a bowling alley as he grew up. Van was a very talented artist. Cartoon characters were his specialty. Van sacrificed his wants and talents for his family. He was a selfless man who will be missed forever.

Van is survived by his wife Sherry, his three sons, Brad, Travis and Eric, and his 7 grandchildren, Brayden, Parker, Austin, Jordan, Raegan, Aria and Maizy and his sisters Jennifer and Kay

To send flowers to the family or plant a tree in memory of Van Kent Lupher, please visit our floral store.

You can still show your support by sending flowers directly to the family, or by planting a memorial tree in the memory of Van Kent Lupher
Share a memory
© 2021 Parker and Elizabeth Funeral Home & Crematory, LLC. All Rights Reserved. Funeral Home website by CFS & TA | Terms of Use | Privacy Policy