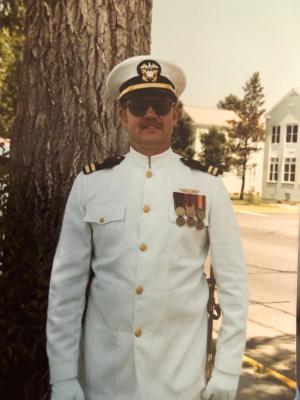 Samuel William Reusser (Sam), born July 7, 1940, transitioned from this world on Friday, the 13th of March 2020 after a courageous battle with cancer over eleven years.  Sam was known for multitudes of stories which ranged from his time in the Navy, to working in the electronic field, to remembering good times with his friends and family.  He was a man with a big heart who was always willing to help anyone in need, no matter the relationship or length of time he knew them.  If you picked up the phone and asked him for help, he would be there.

Sam attended West High School in Denver, Colorado before joining the Navy in 1959 at the age of eighteen.  His career in the Navy spanned a total of thirty years, officially retiring in 1989 with the rank of Lieutenant.  After his daughter was born, his family moved from Seattle, Washington back to Denver, finishing out his military career as a Reservist.  While serving in the Reserves, he attended college courses at night which kick-started his engineering profession, leading to employment with several technological companies.

Sam deeply loved his only child, Julie, and he always made a point of saying he thought of her husband, Ken, as his own son, never a son-in-law.  He was so very proud of his granddaughter, Rachael.

Same married Kathi McKnight on April 12, 2009 on a blustery Easter Sunday afternoon at Red Rock Amphitheater in Morrison, Colorado.  He proudly partnered with her as website manager, technical support, audio visual technician, workshop assistant, sherpa, and cheerleader in her profession as a certified master handwriting analyst, speaker and author.  They shared a special love and devotion that was one of-a-kind.  Residing in Parker, Colorado, Sam died at home with Kathi by his side until his final breath.

Sam passionately loved the mountains and his favorite pastime was golfing - especially in Winter Park, Colorado.  The golf course he loved so much was Pole Creek, just outside of Fraser, where he played many rounds of golf throughout the years with various friends and his son-in-law.  He lived out-of-state for a few years, but always considered Colorado and the mountains his home.  His other favorite pastimes included working on computers, watching movies (both old and new), listening to music (he was a huge music buff), and of course, cheering on the Broncos.  Though the last few years or so, he said he just couldn't watch the games LIVE anymore as his heart couldn't take it; however, he would record them, watching the highlights only after FIRST learning whether the Broncos won or lost.

Sam would love anyone interested to please visit his website to read his articles, musings, views and explorings around his passion about Eternal Soul.

Please check back at this website for the date and times for the funeral service that will be scheduled for later this summer.

To send flowers to the family or plant a tree in memory of Samuel "Sam" William Reusser, please visit our floral store.

You can still show your support by sending flowers directly to the family, or by planting a memorial tree in the memory of Samuel "Sam" William Reusser
Share a memory
© 2020 Parker and Elizabeth Funeral Homes & Crematory, LLC. All Rights Reserved. Funeral Home website by CFS