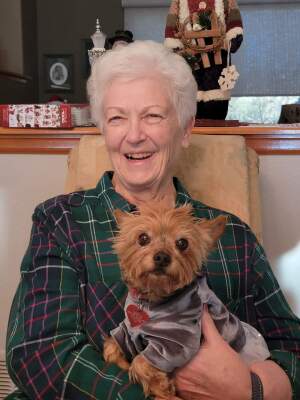 Patricia “Pat” Mary Rogers, 77, peacefully passed away at her home in Aurora, Colorado on Monday, April 18 after a short battle with ALS (Lou Gehrig’s disease). Pat was born January 30, 1945, in Chicago, Illinois. She grew up in South Side Chicago and graduated from St. Augustine Catholic School. During her late teens she began pen palling with a U.S. serviceman stationed in Kunsan K-8 Air Base in South Korea named Marvin “Marv” Rogers.

In 1964, Pat and Marv were married in Chicago, IL and subsequently moved to Aurora, Colorado where Marv had already purchased their first home. In addition to working, she was always involved in her children’s school and activities. Road tripping was something her and her family did every Summer. Disneyland was one of their regular destinations. Even after her children were full-grown, Pat and her husband loved to go to Disneyland. Once she retired from National Farmer’s Union, she worked part-time at Costco as a “demo lady”. Though this position was very grueling at times, she loved doing it for the next 10 years. It was there, she met many wonderful co-workers who then became close friends. Everyone knew her love for roosters and Christmas, but her greatest passion were two Yorkies, Chloe and Chanel. These two adopted, furry friends brought her the greatest joy.

Pat was preceding in death by her husband, Marvin Rogers; her parents, Helen and William Reddy; children, Donald Rogers and Michael Rogers.

To send flowers to the family or plant a tree in memory of Patricia Mary Rogers, please visit our floral store.