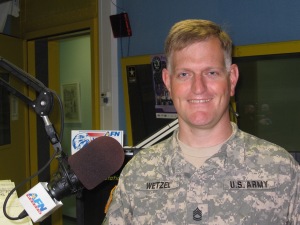 Michael “Mike” Louis Wetzel, 52, passed away on November 18, 2020, in Bel Air, Maryland.  He was born on May 24, 1968, in Norwich, Connecticut, to Robert and Carole Wetzel.  Mike grew up in Hawaii and graduated from Moanalua High School in 1986.  He joined the U.S. Army straight out of high school and enjoyed a 24 year career first as a legal affairs clerk and then a broadcaster.  Over his time in the Army, he earned his Bachelor’s degree in English and his Master’s degree in Public Relations while serving in Korea, Italy, Germany, North Carolina, Georgia, Iraq and Hawaii.  He retired at the rank of Master Sergeant in 2010.   Mike then began a second career with the Colorado Education Association as Communications Director and worked tirelessly for the teachers of Colorado for the next nine years.

Mike was an absolutely dedicated family man.  He married Erica September 23, 1995.  They went on to have Jill and Marisa and Mike proved to be the best kind of dad.  From long stroller walks to playing pretend to pushing band equipment, he was there as the most awesome dad any girl could hope for.

Outside of his family, Mike was a diehard sports fan, cheering on his New York Yankees and Pittsburgh Steelers.  He also loved attending concerts and saw all the favorite bands that crossed his path.  Mike had an adventurous spirit and traveled to the far corners of the world, to include Namibia, Japan, Kyrgyzstan, Egypt, Iceland and most of Europe.  He loved life and lived it well.

Mike is survived by his wife, Erica and daughters, Jill and Marisa, of Parker, CO, his father, Robert of North Vernon, IN; his mother Carole of Parker, CO; and brothers Pat of Wahiawa, HI, and Jeff Turner of Manila, Philippines.

In lieu of flowers, please consider a donation in Mike's memory to the Gary Sinise Foundation. (See below)

To send flowers to the family or plant a tree in memory of Michael "Mike" Louis Wetzel, please visit our floral store.