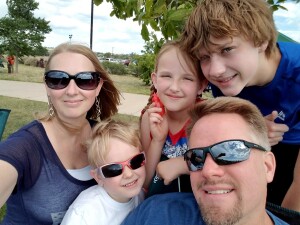 Kevin was born in Longmont, Colorado on March 8, 1970, to Keith and Verta Simpson. As the youngest of four siblings, he had two older brothers, Michael Simpson and Steve Simpson, and an older sister, Deborah Stewart. They made their home on South Sunset Street in Longmont, adjacent to a rail spur that captured Kevin’s attention from an early age.

After attending schools in Longmont, Kevin graduated from the University of Colorado at Boulder in 1996 with a bachelor’s degree in Electrical Engineering. He received his professional engineering license in 2002 and worked in the engineering field for 26 years. Kevin culminated his career as a Plans Review Engineer for the City and County of Denver Community Planning Department.

Ever an avid train lover, Kevin enjoyed visiting rail stations, tunnels, and train yards, as well as working on his own HO and N scale model train layouts in the basement of his house. His other enjoyments were road tripping with his family, astronomy, and geography. Kevin loved comparing his rail maps and train call signs to geographical features in the field.

Kevin married Sonja Curtiss in 2008, at the Izaak Walton Inn in Glacier National Park, Montana. Along with her son, John “JJ” Aulsebrook, they have two children, Lily Simpson and Tyler Simpson.

Kevin is survived by his wife and children, mother Verta Simpson, siblings Michael (Lucy) Simpson, Deborah (David) Stewart, Steve Simpson, as well as numerous nieces, nephews, and cousins. He was preceded in death by his father, Keith Simpson.

To honor Kevin’s wishes, a private graveside celebration of his life will be planned at a later date. We invite you to share your fondest memories of Kevin with the family on the tribute wall.

To send flowers to the family or plant a tree in memory of Kevin Allen Simpson, please visit our floral store.

A Memorial Tree was planted for Kevin

You can still show your support by sending flowers directly to the family, or by planting a memorial tree in the memory of Kevin Allen Simpson
© 2022 Parker Funeral Home, Inc. & Crematory. All Rights Reserved. Funeral Home website by CFS & TA | Terms of Use | Privacy Policy | Accessibility