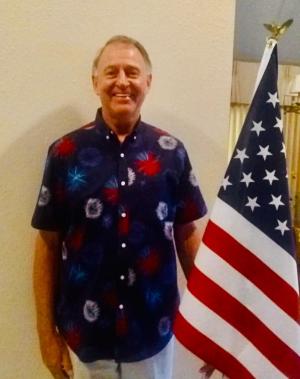 David Elliott Osvog was born July 4th 1946 in Brookings, South Dakota to Homer and Lillian Osvog. He attended Brookings High School and worked at his father’s implement company.  He attended South Dakota State University graduating with a major in Electrical Engineering.  While at SDSU he enjoyed singing in the Statesmen's chorus and participating in homecoming activities.

Dave was hired by Westinghouse in their metering division, in Pittsburg. He was recruited by WESCO as a manufacturers' representative for electric utility equipment and relocated to Grand Island, Nebraska. His gregarious personality and knowledge of electrical theory enabled him to become a well-respected and well-liked instructor in various industry sponsored metering schools.  With an entrepreneurial spirit, he started his own company, Equal Electric, in the early 80’s. He enjoyed his work so much he retired only two years ago.

Dave married Kathy Thormodsgaard, August 28, 1976, and they moved to Parker, Colorado. They welcomed a son Jason  and a daughter Alysa .

Dave enjoyed traveling, trying new restaurants, indulging in dark chocolate and very dark beer. He loved fireworks, celebrated not only on his birthday, anytime he could marvel at their site, and feel the loud boom in his chest. He was a faithful Lutheran, with an outgoing personality and an infectious sense of humor. He was a gifted comedian especially about Ole and Lena.

Dave was diagnosed with cancer the end of August.  When friends asked what they could do, he said to email him a joke. He passed away Nov 3, 2019 at Parker Adventist Hospital. Dave is survived by his wife Kathy, mother Lillian, Son Jason, daughter Alysa, and brother Craig (Candy).

Memorials may be given in Dave’s name to Joy Lutheran Church.

To send flowers to the family or plant a tree in memory of David Elliott Osvog, please visit our floral store.