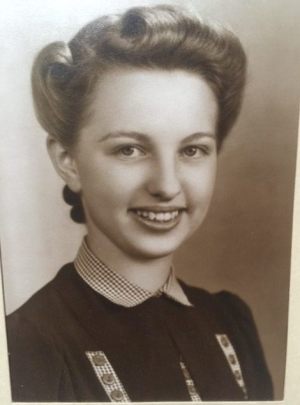 Arlene Sylvia Hutchinson was born May 26, 1922 in Odebolt, Iowa. She was the only child of Albert Walter Huldeen and Carrie Marie Pearson. Arlene graduated as the valedictorian of her class in Odebolt on her 16th birthday. Throughout her school years, Arlene was a spelling champion, a straight A student and a State Champion in xylophone/marimba competitions. The Odebolt/Arthur High School Band was a national champion in 1938 with Arlene headlining as a soloist.

Arlene married Raymond Eugene Hutchinson in Alamogordo, New Mexico on December 18, 1943. Ray served as a navigator in the European theater, flying over 30 missions, including several on D-Day in support of the allied troop invasion.

Upon returning from the war, Arlene and Ray were stationed in Miami. After his honorable discharge, they moved to Des Moines Iowa where Ray began a 37-year career with United Airlines.  Following a subsequent brief stint in Chicago, they relocated to Denver, Colorado, where they resided for the remainder of their years.  Before children, Arlene worked as an Executive Secretary at Johnson & Johnson and for the presidents of Iowa State University and Colorado Women’s College. After children arrived, Arlene stayed home to raise them, teach piano, and support Ray in his work with United.

Arlene was a League of Women Voter’s Lifetime Achievement Award recipient, and was active in LWV for over 50 years.  She also supported UNICEF (United Nations International Children’s Emergency Fund) and Habitat for Humanity for many years though fundraising activities and volunteered at Arapahoe Community College’s “The Listening Post” where she supported students by listening to their life situations.

Arlene will be interred in the memorial garden at First Plymouth Church along side her husband of 65 years, who preceded her in death in 2008.

She will be greatly missed by her family and friends.

Donations are encouraged to:

To send flowers to the family or plant a tree in memory of Arlene (Huldeen) Hutchinson, please visit our floral store.