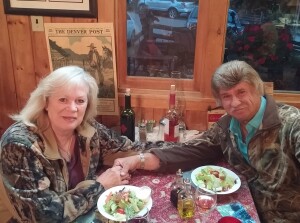 Tony Collado, 74, of Elizabeth, CO passed away on March 23 from a sudden heart attack. He was born on September 14, 1946, and raised in Wyckoff, New Jersey. He was the youngest of three children of Frank and Angela Collado, having two older doting sisters, Maria and Angela.

Tony came to Colorado in 1970 because he had always hunted with his father in New York State and looked forward to hunting in Colorado. He and Patricia Wilkie (Rambo) were married October 3, 1975. They lived in Arvada, then in the Parker/Elizabeth area since 1982. Tony was an avid hunter and fisherman. He backpacked, horsepacked, hiked and camped in the Colorado mountains from the day he arrived. He also studied the skies and astronomy was one of his favorite discussions. He designed and built his own 15-foot observatory, automated with tracking motors and operable hatches. His other passion was singing. He was involved with a band early on as a singer and later became the "ring-leader" and host of many monthly karaoke events. Beginning in the mid 1990’s, he organized a karaoke group with nearly 20 dedicated singers to come and share his passion. The gatherings were legendary.

His business was excavating, which he started doing at age 16. He had an opportunity in 1979 to start his own business which is still operating today. Never was an advertisement needed. All his success was word of mouth. He was so talented with a machine that he was locally famous. He was kind, witty, intelligent and a friend to all. He is survived by wife Patricia, stepsons Marcus (Victoria) and Tony Rambo. Grandsons are Alex Mondragon, Christopher and Tyler Rambo and Zachary Rambo. He is survived by sister Maria Aponte (Philip) of Ft. Myers, Florida. Nieces and nephew are Laura Riehl (Jim) of Overland Park, KS; Lisa Abercrombie (Jacob) of Hiram, Georgia; Darlene Gray of Point Pleasant, NJ and Philip Aponte (Carole) of Plano, TX.

He will be greatly missed by all who loved him.

To send flowers to the family or plant a tree in memory of Antonio "Tony" Frank Collado, please visit our floral store.