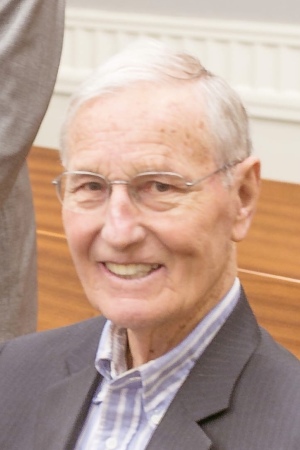 Bob was born in his grandmother/grandfather's home in Oakley, Kansas on May 26,1931 during the dust bowl years.  His family existed on farms near Grainfield, McAlaser and Monument for a number of years, moving to Oakley when he was 10.  He graduated from Oakley High School with a love for science and athletics, playing on whichever team was in season.

Bob graduated from Kansas State University with a BS in Chemical Engineering, while being a "tight end" on the football team for 3 years.  He was a member of ROTC and served in the USAF for 3 years as a pilot in Georgia, Texas, Oklahoma and aon, France.  Following his discharge, Bob taught and studied at KSU for a year before beginning a 32 year career in the chemical industry.

We learned more of United States geography through jobs which were coast to coast and Wyoming to Texas.  Bob's first industry job was with FMC Corporation at a trona mine 25 miles west of Green River, Wyoming.  He was quickly climbing the ladder, when the desire to have his own business struck.  We tried unsuccessfully in Bakersfield, California to make and market household products, but were felled by competition.  After a year in Danville, CA, figuring out what would be next, we landed in San Jose, California with International Minerals where Bob was lured by a former FMC associate to manage a plant making monosodium glutamate.  Declining a transfer to NYC with I.M., we headed to a job with BASF Wyandotte near Detroit, Michigan.  Next and final stop career-wise was with Olin Corporation in Stamford, CT, where Bob was director of the swimming pool chemical division.  We lived in Wilton CT for the next 9 years until retirement.

In lieu of flowers, please consider a donation to the Alzheimer's Association, Wounded Warrior Projecrt, Habitat for Humanity or a charity of your choice.

I was born May 26, 1931 in my Grandmother/father Widdifield's house in Oakley, Kansas.  At that time, our family (mother Ruth, father Ernest, and brother, Richard) and I lived in a house on a rented farm about a mile or two west of Grainfield, Kansas. (Delores was born in Grainfield about six months later on November 29, 1931).  Delores' father was a rural mail carrier from Grainfield who delivered our mail.

I remember only a couple of things about this house.  First, Dad bought fish from Duluth, Minnesota in the fall which came packed in ice.  Dad kept the fish frozen with ice from our stock tank which was covered with straw and by placing everything in a north corner of the house that the sun could not reach.  So we ate fish all winter.

The other thing I remember was when a neighbor boy who helped Dad fix the drive belt on our washing machine got his finger tip cut off by the belt and pulley.

Since Dad could not make a profit on this farm, our family moved to another rented farm 6 miles south of Monument and a couple of miles west.  As all Kansas farmers know, these years were the dust bowl years of the thirties when very few made a profit from farming. Fortunately, my grandfather Louis needed a manager for his farm and someone to feed the hired men that were required to do the farming.  So my Dad and Mother both got jobs--Dad to manage the farm and Mom to provide the food for the men and family.  Mom has said that those 6 years ere the most difficult of her life. She had to work until late at night, and then to get up at 3:00 am.  The number of hired men ranged from about 10 in the winter to about 30 during wheat harest in June and July.

During these years, Richard and I went to school at Monument Grade School where I went through the 4th grade.

At this time, the dirty thirties ended and farming and ranching became profitable again.  So Dad got a loan from Farmers State Bank and bought the farm and ranch at McAlaster, Kansas, 30 miles west of Oakley.

Since the McAlaster school ran a bus to pick up the farm kids, it was possible for all 5 Bertrand kids to go to school up to the 8th grade.  The school had one teacher for 8 grades. There were 9 other kids, no playground equipment or organized activity.

We hated the situation, but Mom and Dad wanted us to try it.  At the end of 4 weeks, Richard went to Oakley to stay with Grandmother and Grandfather Widdifield.  At the end of 5 weeks, I joined Richard, and at the end of 6 weeks, Mom and Dad rented a house in Oakley and moved the entire family to Oakley where we all went to school through high school.

At McAlster the following year, 2 kids burned the school and Dad ended up buying the unburned shell of the building and the ground to use for wheat storage.