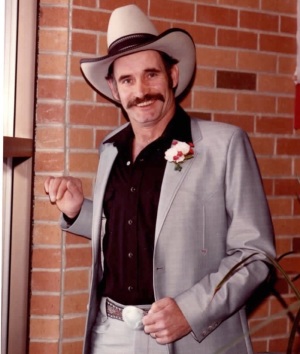 Edward R. Scheidt, 75, of Kiowa, CO, passed away Sunday, March 3, 2019, surrounded by his loved ones.  Ed was born on October 24, 1943, to Edward and Ella (Fode) Scheidt in Bismarck ND. He attended schools in Bismarck, ND and Anaconda, MT. After graduation he joined the Navy.  Upon completing his tour of duty Ed returned to Bismarck and married Diane Bender.  Ed and Diane had two children; Corey Scheidt born on September 13,1966 and Cammy Scheidt born on October 4, 1968.

On December 29, 1984, Ed married Geri Pfennig.  In 1986, Ed and Geri moved to Kiowa where he worked in construction until he retired in 2009.  Ed was an outdoor man that enjoyed ranching, hunting, fishing, and raising Aussies.  Most of all Ed loved to make people laugh, even entertaining the medical staff. Ed never met a stranger and always had a joke or funny story to share.  Ed was preceded in death by his father, Edward Scheidt; mother, Ella (Fode) Scheidt; daughter Cammy Scheidt; brothers, Frank Walker, Henry Walker, and Emil Scheidt; sister, Betty (Scheidt) Allen.  Those left to cherish his memory include his wife of 34 years, Geri (Pfennig) Scheidt; son, Corey Scheidt; grandchildren, Casey Scheidt (Natalie) and Chelby Scheidt Rush (Eric); brothers, Larry Scheidt (Cheryl); Herman Scheidt, and sisters, Christine Scheidt Raulston (Todd) and Shirley Bender and many nieces and nephews.

To plant a tree in memory of Edward R. Scheidt, please visit our tribute store.