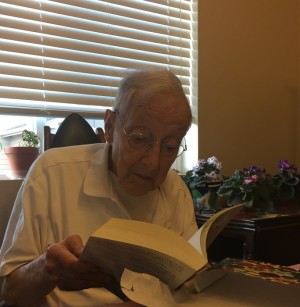 Arthur was born in Havelock, Ontario, Canada on August 22, 1933, to the Reverend Ernest William George Worrall and Ethel Gillings. In 1948 the family moved to Camden, New York, where Arthur graduated from Camden High School. He earned a B.A. in history at the University of the South, Sewanee, TN in 1955.   Shortly after graduation, he was inducted in the U.S. Army, serving two years in Japan where he made several lifelong friends. He then taught middle and high school at Howe Military Academy, Howe, IN.  He attended graduate school at Indiana University, Bloomington, where he met his wife Janet Holasek and earned  an M.A. and Ph.D. in History.

In 1967 Arthur joined the history department at Colorado State University, where he taught for 34 years until his 2001 retirement. He was deeply committed to faculty governance at the University, and served on the Faculty Council for many years. Arthur specialized in colonial America and religious history, publishing several scholarly articles and books including Quakers of the Colonial Northeast.  He had an unwavering commitment to undergraduate education, and formed lasting friendships with many former students. He left retirement in 2002 to teach for one semester with Janet at the University of Economics in Prague, Czech Republic. Arthur loved to travel - after retirement he and Janet visited Ireland, Australia, New Zealand, Japan, the Baltic, Norway, Finland, and many other countries.

Arthur could be found on soccer fields throughout northern Colorado, at first as his children’s coach and later as a referee. He served as the volunteer president of the Fort Collins Soccer Club for many years, donating his referee fees from hundreds of games to assist children who could not afford soccer club registration fees. A former collegiate runner, he never missed a chance to see his daughter’s cross-country and track meets.

Arthur loved classical music.  He was a fixture at his son Tom’s orchestra performances. He returned to Sewanee for several choir reunions with son Tim, and in 2009 joined the University Choir for its engagement at Salisbury Cathedral in Salisbury, England.

In lieu of flowers, memorials can be made to Wycliffe College, 5 Hoskin Avenue, Toronto, ON M55 1H7 or The University Choir, University of the South, Sewanee, TN.